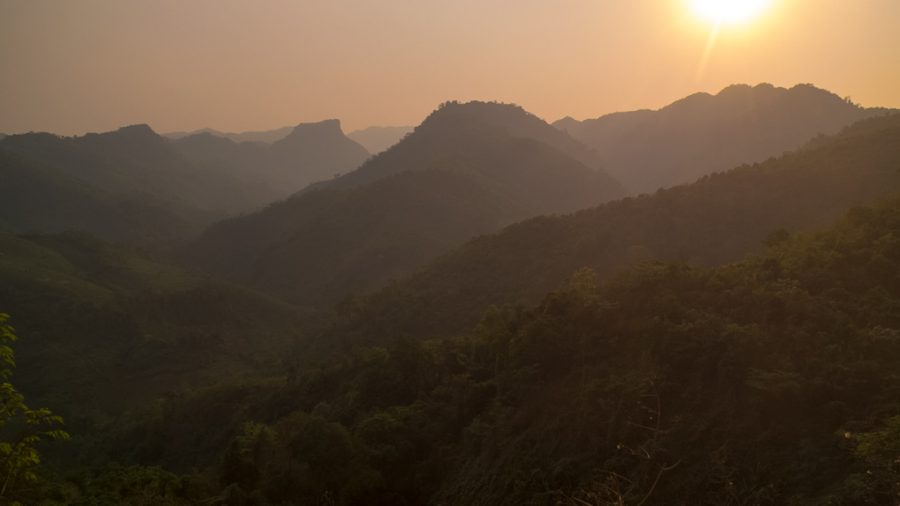 Another day, another climb, the highest I’ve done in Laos and maybe even since the beginning of my 4 years trip! It started by a wet morning and finishes by a wet night. Between that, the weather was super hot. I feel I’ve been only climbing today except that huge downhill that fortunately came at last. Normally, every road I will use until Vientiane will be easier than this one today. Few! 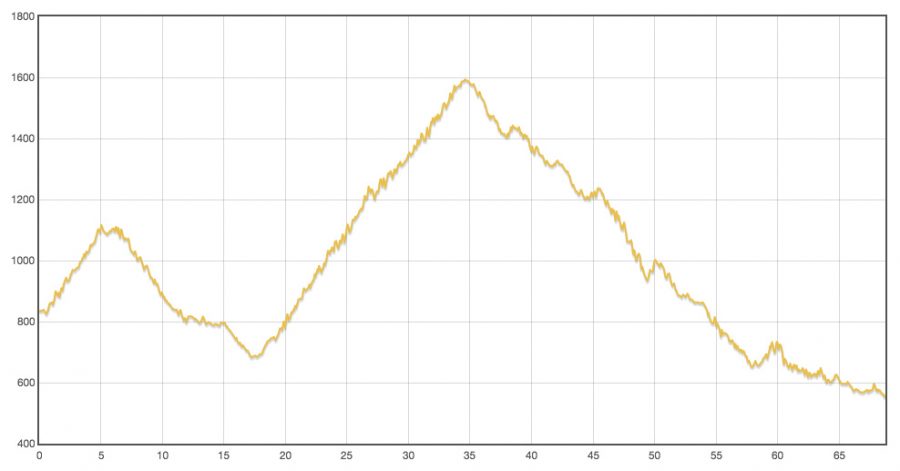 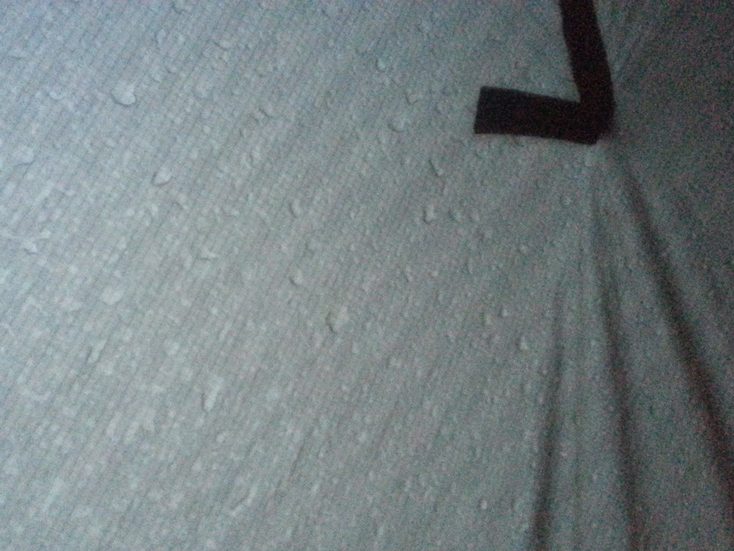 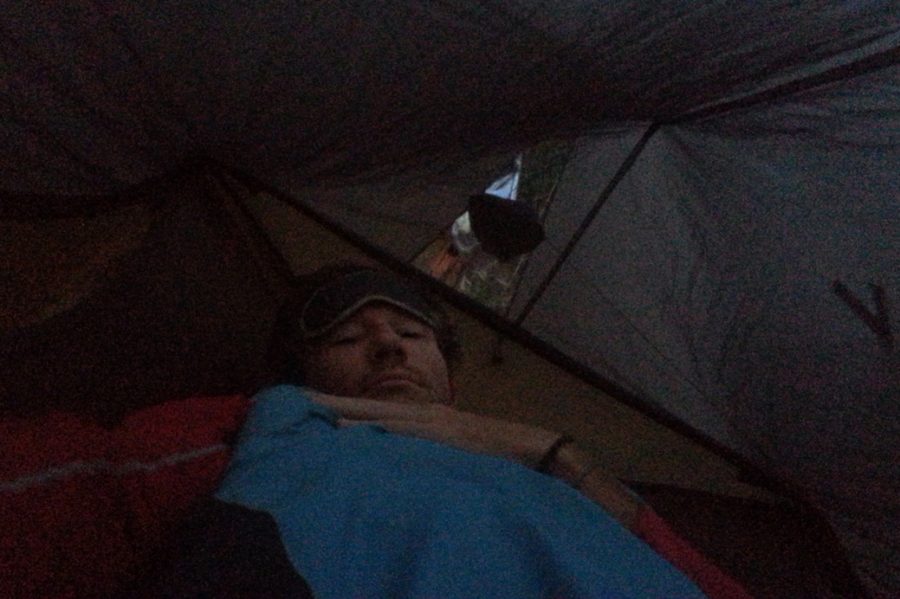 Once the storm left yesterday night, I slept so well. I could easily stay here another hour but I know early morning is the best to enjoy cycling. Let’s move. 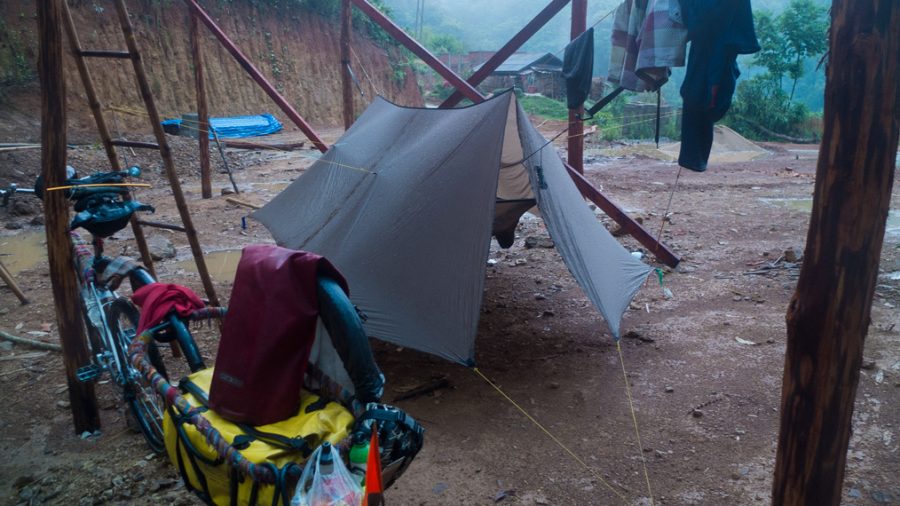 That’s my campsite. The heavy rain pass through my red waterproof bag this night. I don’t know how but my stuff inside was humid. 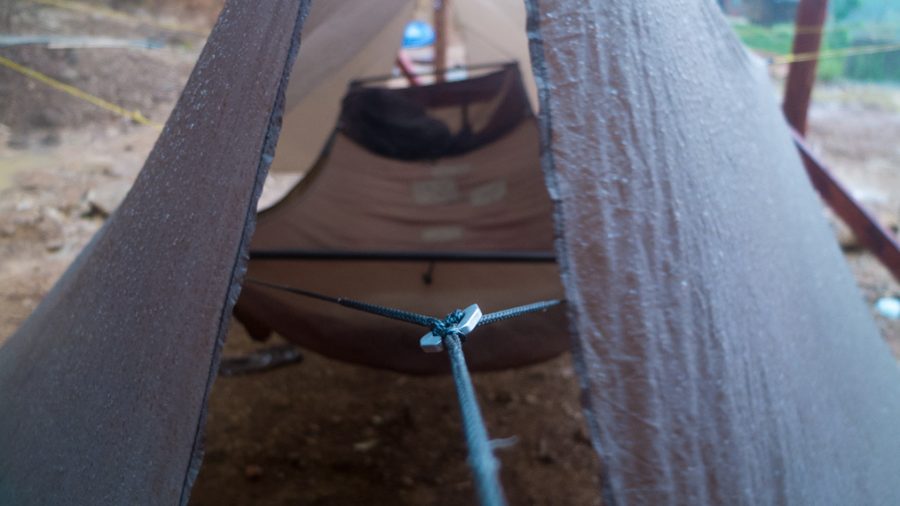 The tarp resisted perfectly this time so I stayed dry. 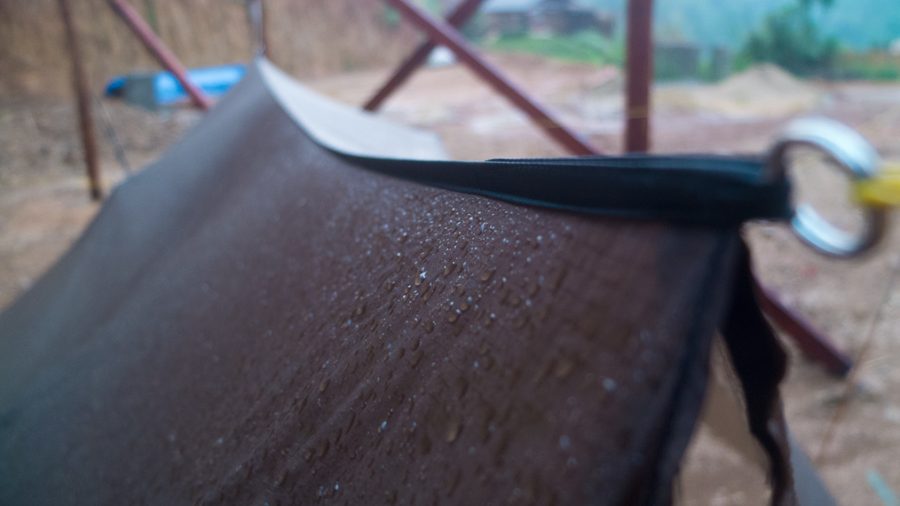 First I will pack all the dry things and finish by the tarp. 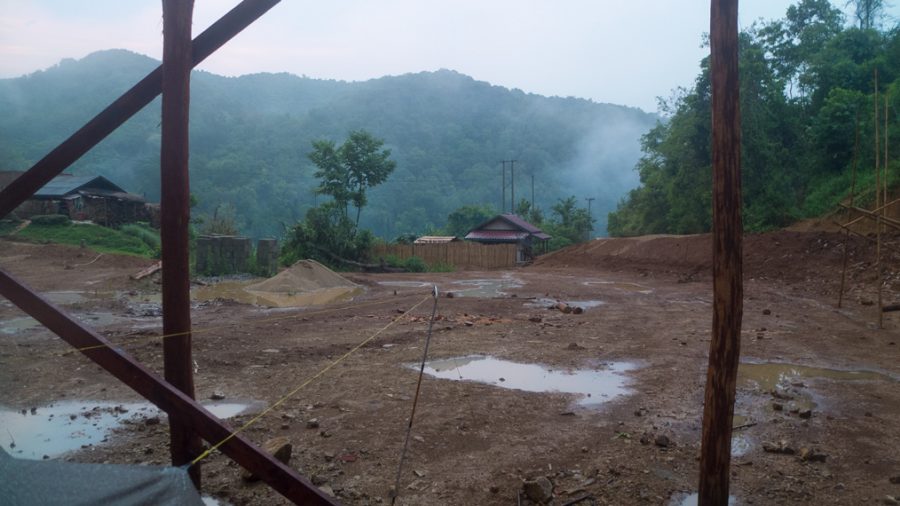 My biggest fear yesterday night was that, when the rain started, this ground could become so muddy that the pegs would release themselves. In that case I would not have any roof to be protected from. Fortunately, everything stayed in place. 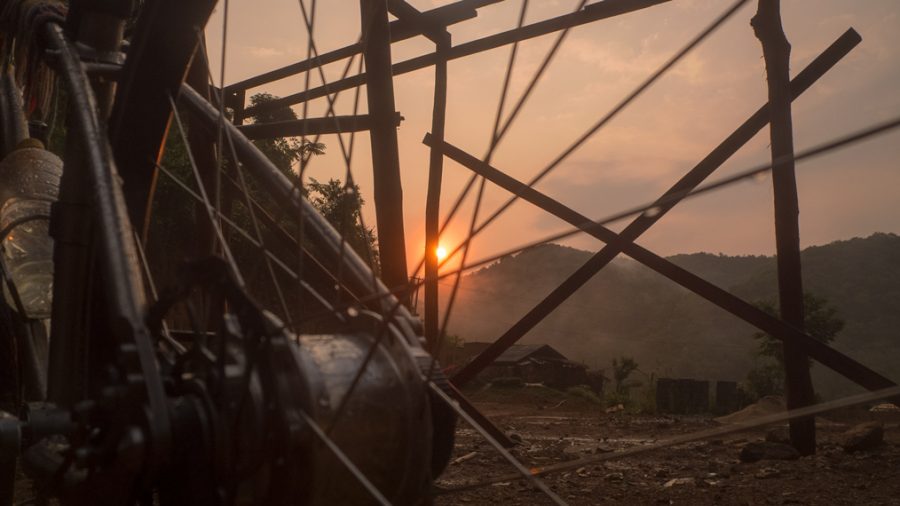 I’m very slow this morning. Because everything is wet I cannot put anything on the ground. I must hook stuff on the bike or the trailer in the right order so then I can pack it all correctly but it takes time. I must clean each pegs too. The sun is already up, hurry up! 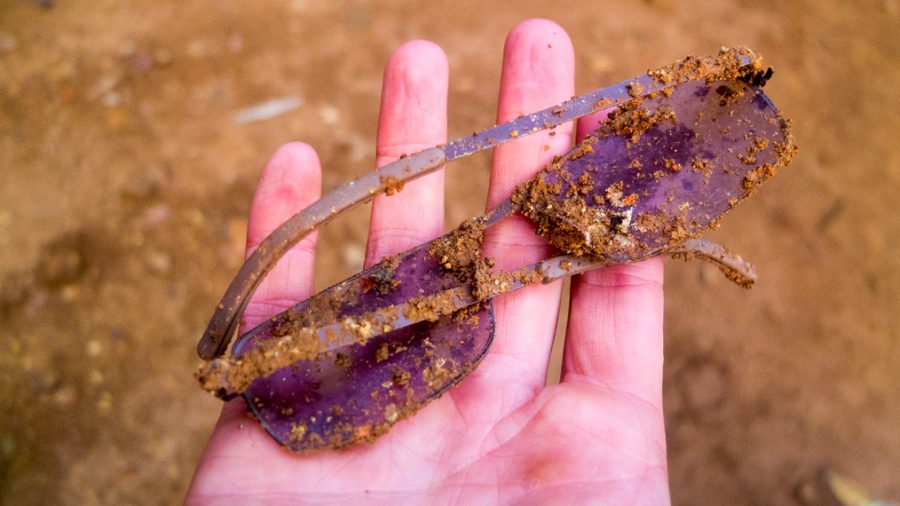 Maybe 30 minutes later, I got finally ready until I realised I lost my glasses. Yesterday, I hooked them on the handle brake of the bike but I could not find them this morning. It took me 5 minutes to find them, on the ground, three metres away from I left them yesterday evening… The glass was knew! Not anymore… Just by taking the dirt off, so many scratches appeared. S***! 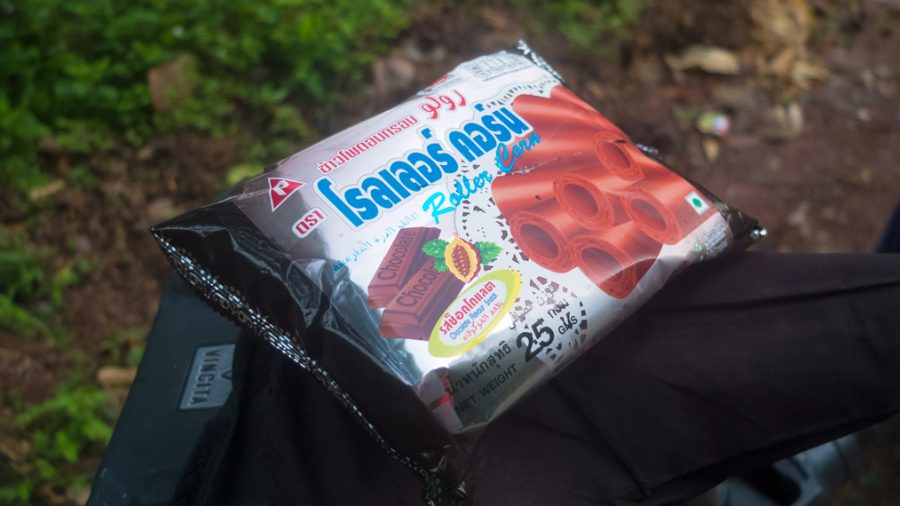 I cycled through the village looking for a small shop where to buy some food for breakfast. Thailand and Laos are pros to sell you air. Of course it’s cheap but there is nothing to eat! Look, 25 grams. It’s nothing! 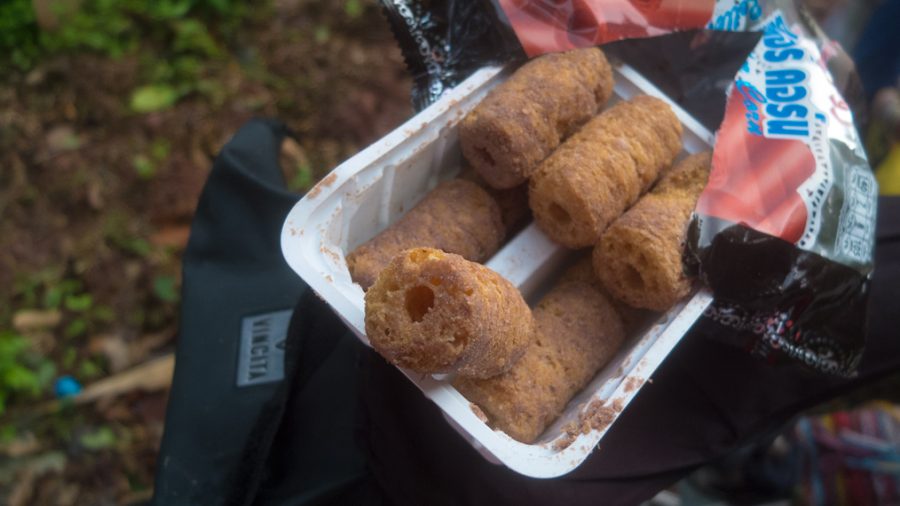 Plus, the packaging is naturally lying on everypoint. It should be chocolate but they put some as less as they can. The bottom middle row is not even filled with biscuit but by the packaging itself. To resume, this is hollow biscuits with a lot of air inside in a fluffy packaging that weighs nothing. What a joke! I always buy something regards its weight and cost but didn’t have the choice this morning. This kind of biscuits are a rip off. Anyway… 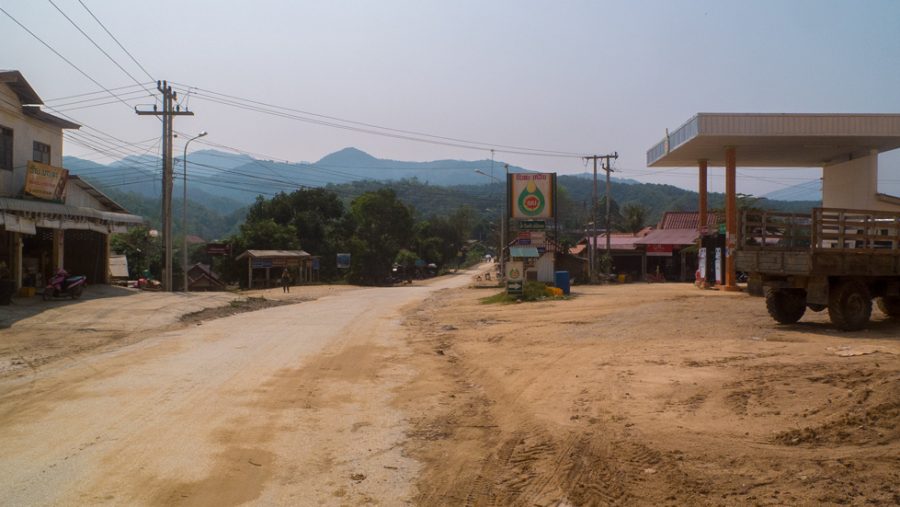 I finished my extra light breakfast and cycled roughly an hour until I reached the next major town. I might have a real breakfast now. 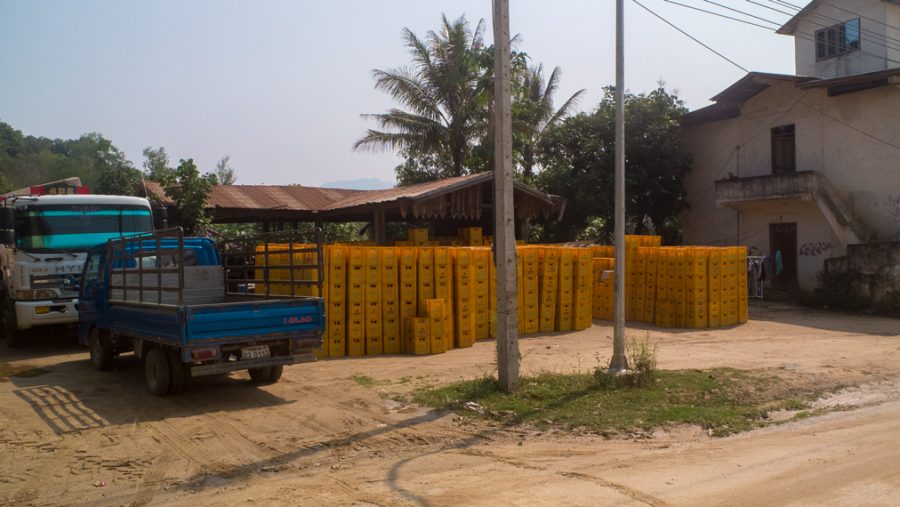 What are these yellow boxes? There are beers. This main brand took over the country. There is no other competitors so you will pay as much as 10.000 Kip for one bear (nearly a meal in certain case) and that’s the minimum price for it. I’m so glad I don’t like beer. It’s just waste of money, that’s all it is. As you can see, people love it. 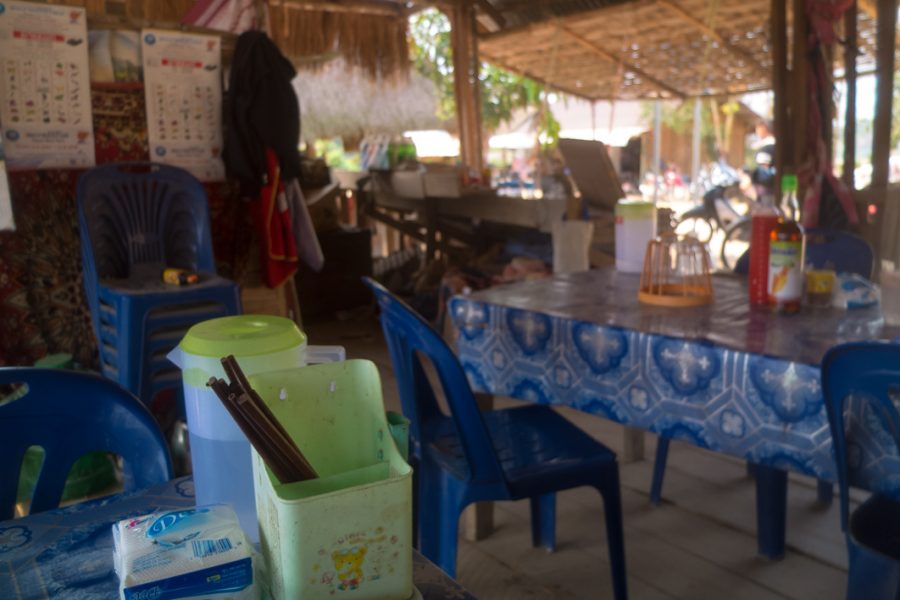 I’ve found very quickly a restaurant at the entrance of the city. The prices seem correct 15.000 kip (I’ve asked before this time). 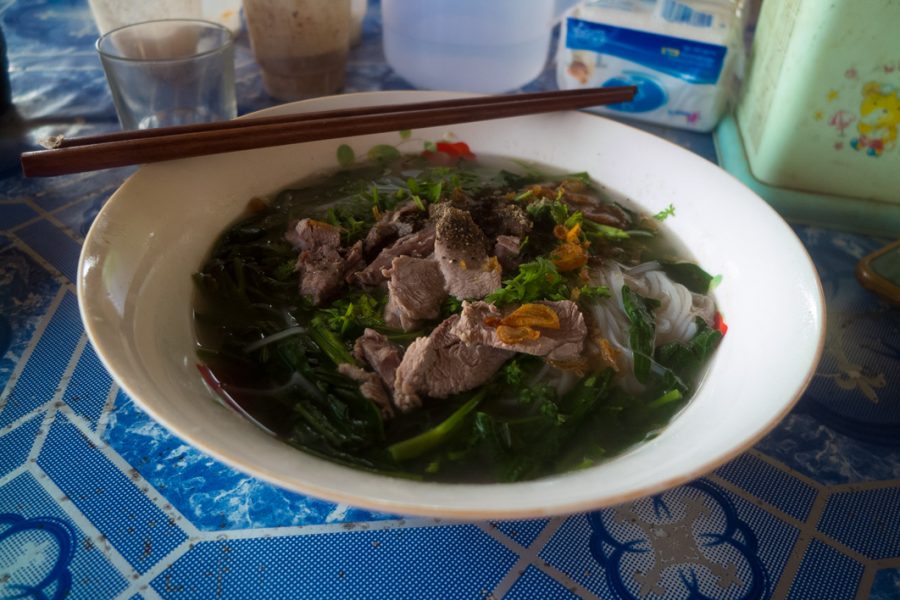 Guess what it is for brunch? Noodle soup of course! :-) 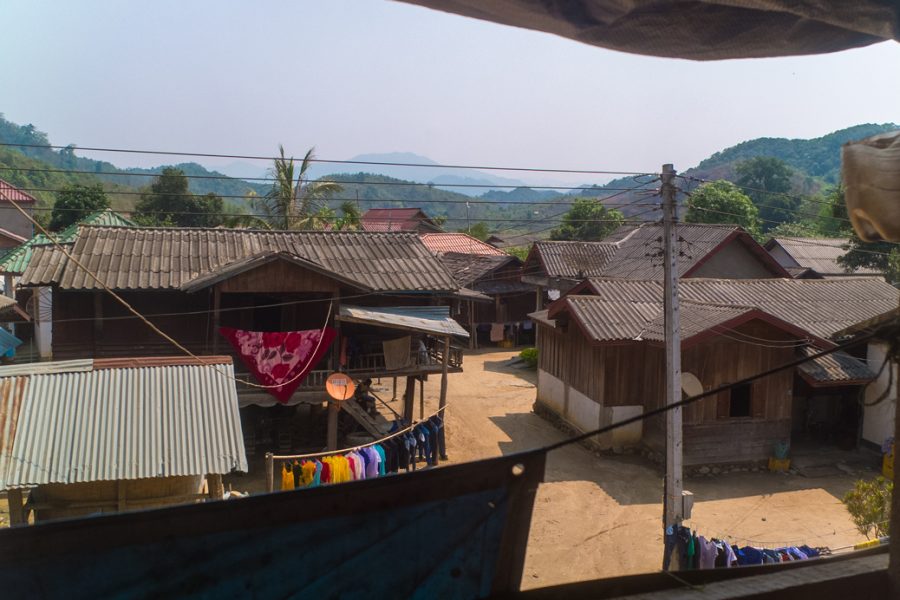 A look at the town from the restaurant. 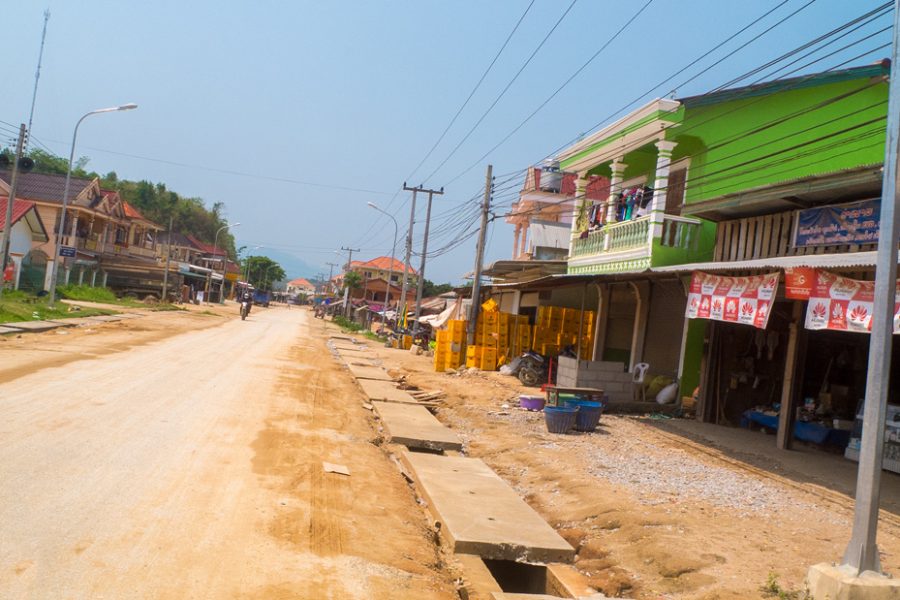 I’m now on my way to a market. I need to find some banana which is the best quality food here. Then I will start cycling up that big hill which is going to be the highest point I will reach since I’m in Laos. I feel I’m going to push my bike again, I don’t know why. 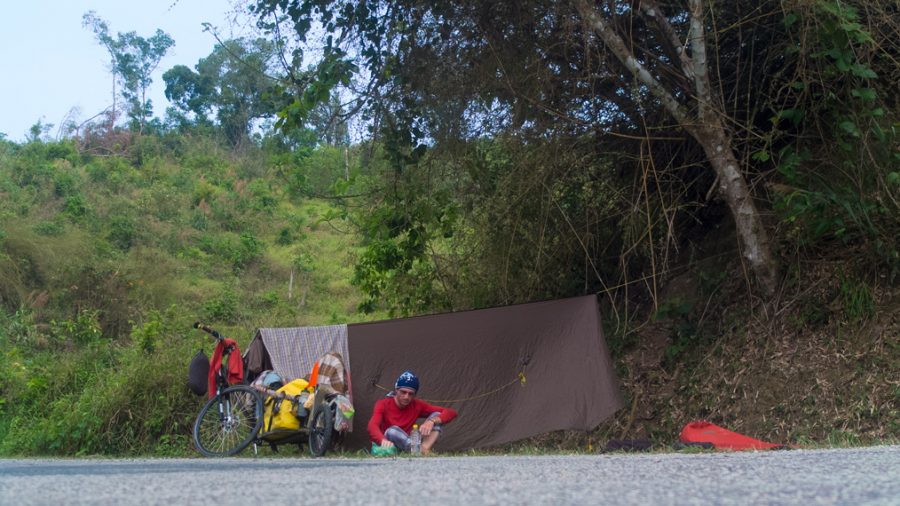 I’ve travelled maybe one hour and then had to stop. Naturally I had to push my bike few times and now the weather is a way too hot to keep on going. I’ve seen an empty area on the side of the road so I decided to set up my temporary camp for few hours. That’s the good time to dry the roof as well.

Not far from me, there was a bunch of Laos people talking. As soon as one of them saw me and reported it to the group, two guys came to me. They did not speak a word of english. I was having a simple lunch (sardines in a can, a cucumber, a tomato and some banana). The guys was laughing, talked to each other looking at me. One of them sat front of me and even before he tried to communicate he pointed to the banana, looked at me and said: “You, me?”. Naturally I understood what he wanted. Sorry?! That’s all you want? At least you could say hello first. I didn’t say anything like this except “no”. I understand we don’t speak the same language but it’s not that complicate to be polite, right? As soon as I negatively answered, the guys left the place. This time they said “goodbye” but I think they understood their mistake. I hope so! 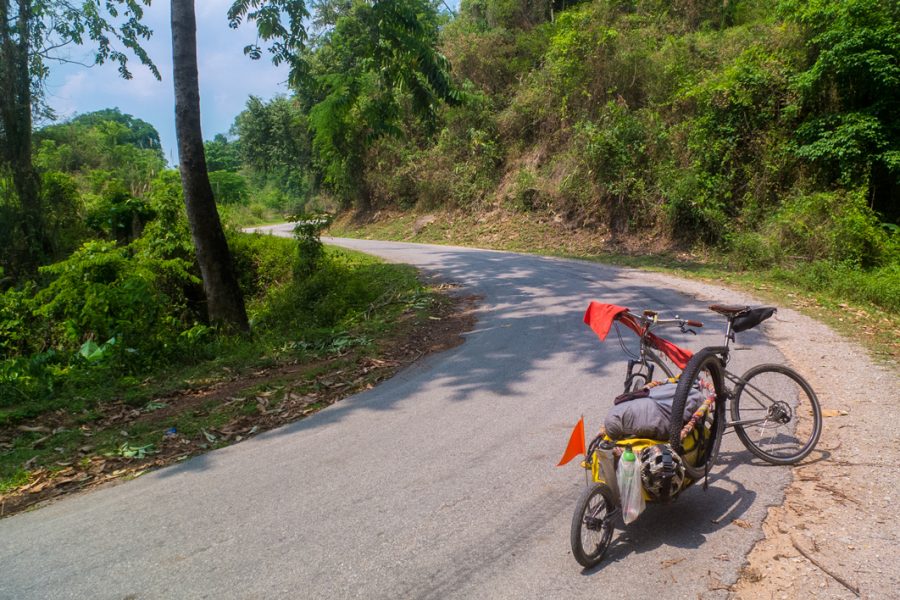 Maybe an hour or two later, I decided to be back on the road. It’s very hot now but as slow as I am, I cannot stop too long if I want to be on time. 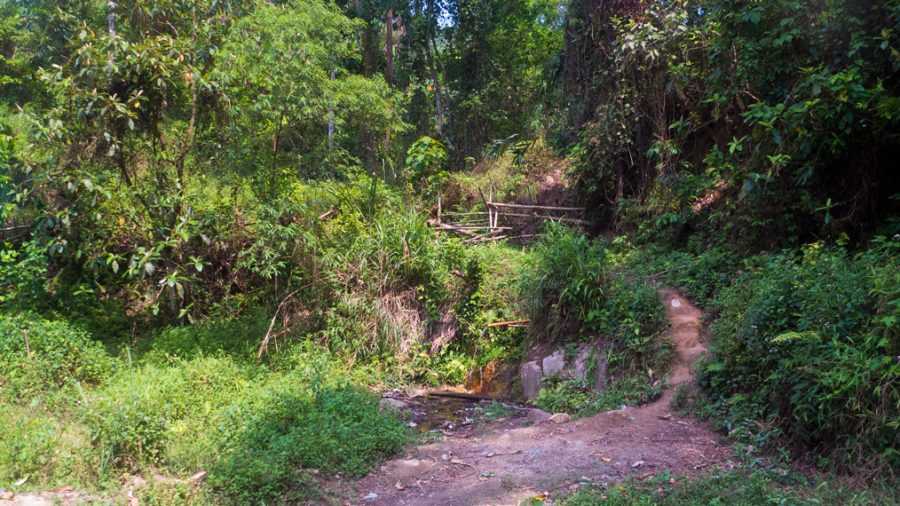 When I see something like this, I must stop! That’s a freshwater source. I still filter it but it’s so nice to be able to refresh myself and fill all the bottles I carry. 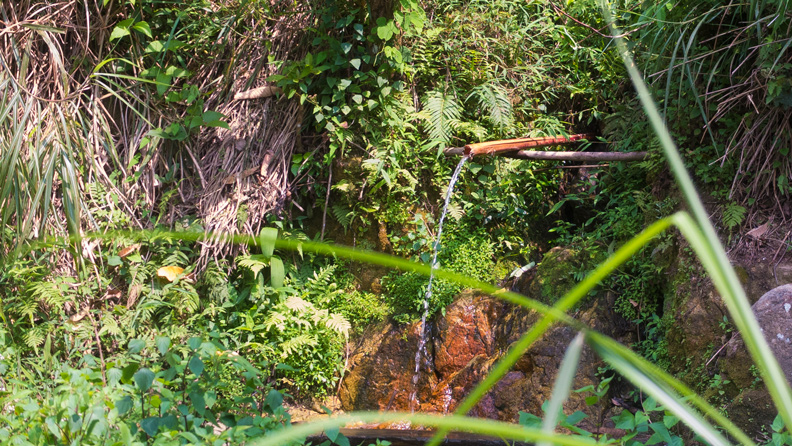 It feels so fresh! 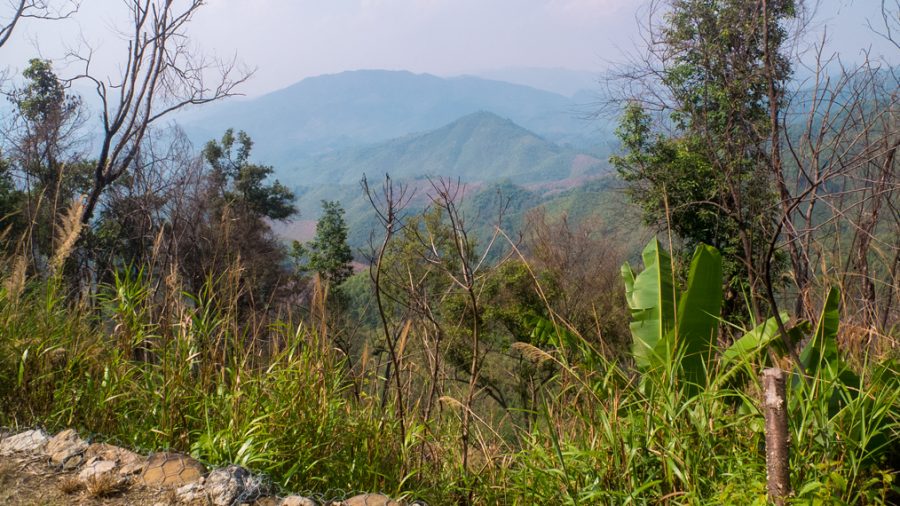 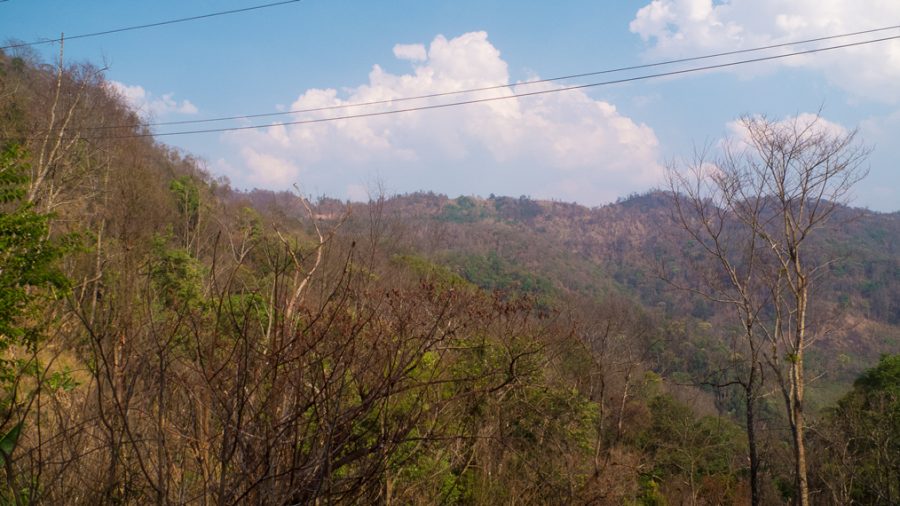 That’s the summit over there, normally. 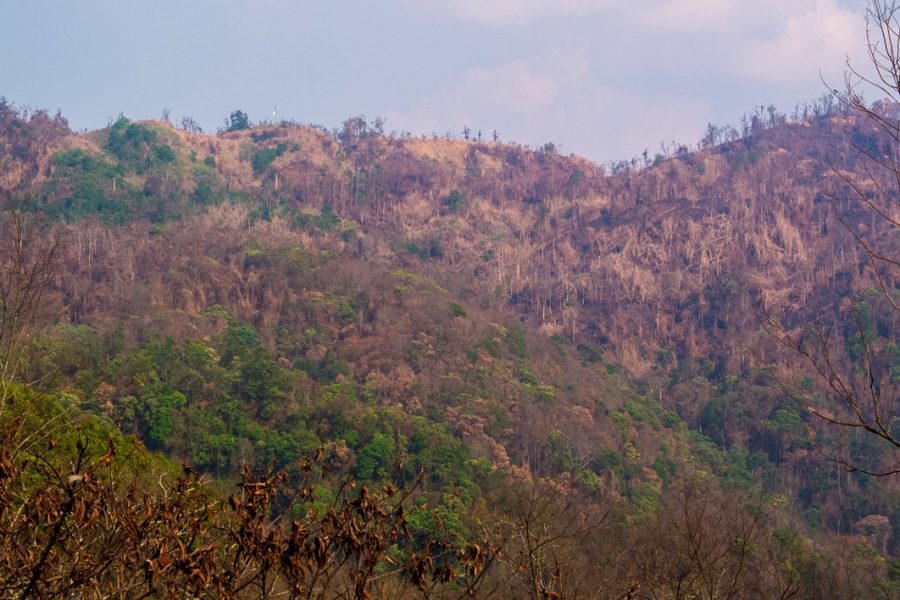 It’s a bit difficult to see on a picture but you can distinguish the road that turns on the other side of the mountain. 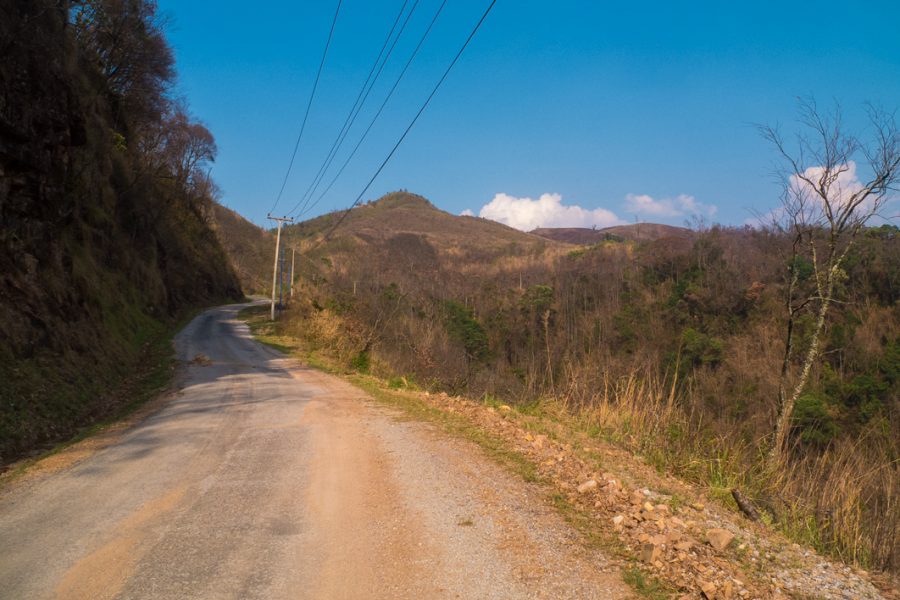 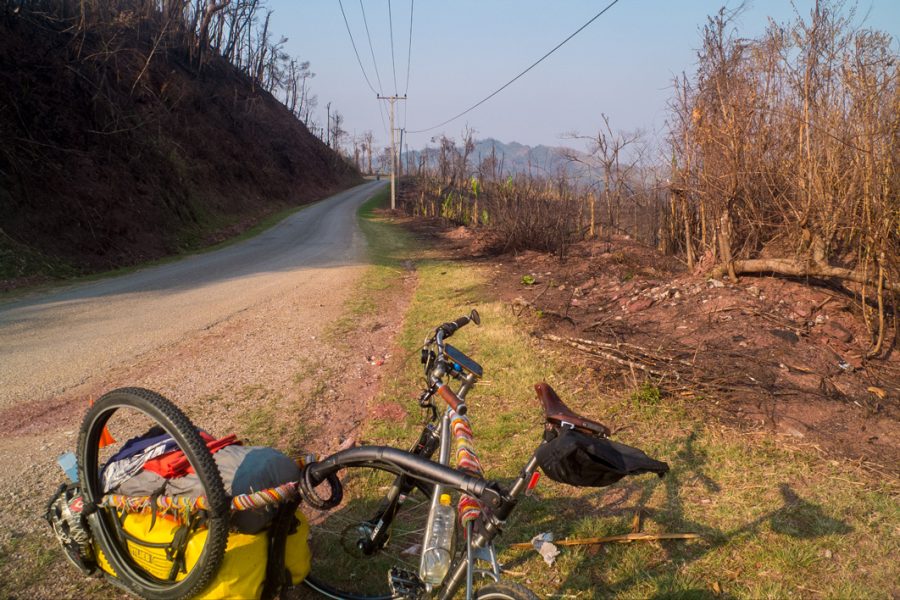 The day passed so quickly today. 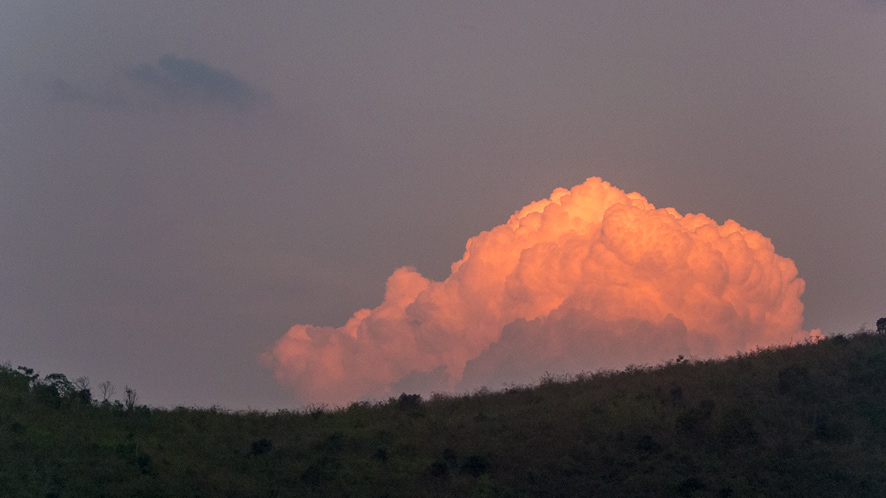 The long downhill is done already. It’s getting dark now, I must find a stop soon. Few minutes later, I’ve stopped in a village and asked if I could use the water from some toilets. When I finished filtering my water, a guy came to me and told me that I could sleep here tonight. There was a kind of local hospital with a balcony. The man showed me the place, explained I could fit my bike on the balcony too, no problem! That’s the first time I was invited by someone in Laos. Then the guy left. As soon as he was gone, two other guys talked to me and explained where I could sleep further on the way. They said something about a village, a bridge. I was confused… Can I sleep here are not? Apparently I could, but not anymore. What is that place they are describing? Their friend’s place? A guesthouse? A free spot? I had no idea… I said: “ok, ok, thank you” and left the place. 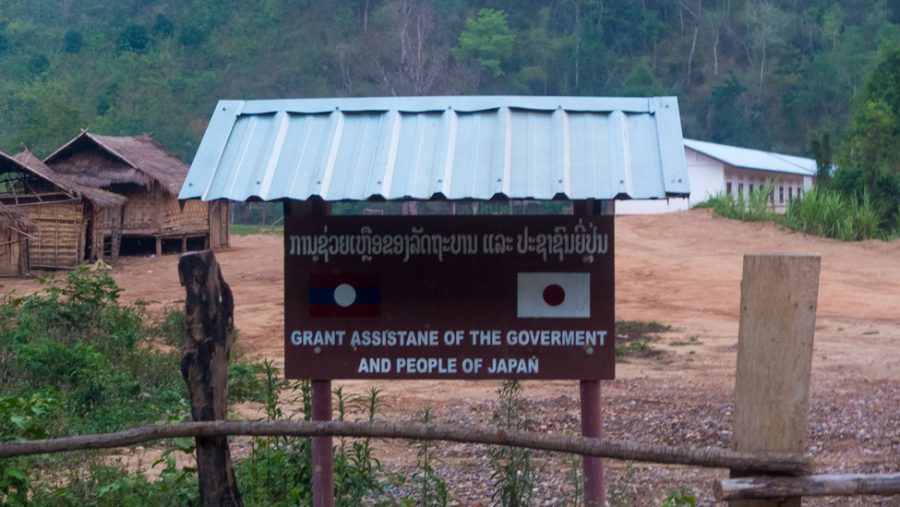 The village the previous guys talked about is roughly 4 kilometres away. Half way towards it, I’ve found this place which seems to be a school. There is a large field and a big shelter at the back. I asked to a woman who were near the entrance if I could sleep there tonight but she said categorically “No”. Like everytime, I don’t know if she said “No” because she did not understand what I said or just because she really meant it. I’ve noticed that Laos people are mistrustful (at least with me or maybe all stranger). When they don’t understand they simply say “No”. I would do the same. This is the safest way.

Talking about this sign. I’ve seen previously some French signs, some Chinese signs, some Korean signs but no Japanese yet. Seems like lots of countries try to help (or take advantage) of Laos.

I’m sure if I did not meet that woman who was actually closing her shop and was leaving soon, I could just walk in that school and nobody would have notice me. Unfortunately it didn’t work out that way so I kept on cycling until the village. Once there, I came across a guesthouse. Three people were standing at the front and with a big smile all together said “Sabaideeeeee”. That make me think: “Should I stop in a dry place tonight and avoid a third storm? I’ve done the highest pass ever today, I deserve it :-). I’ve finally came back to them, asked for the price. The young girl said “15.000”. Wow! That’s very cheap. In fact, I’m in a tiny village in the middle of nowhere. They accepted kindly that I could fit my bicycle inside for the night which I did of course :-)

Once we carried my bike inside, they showed me my room and the shower. For dinner, they had only some noodle and eggs. I added some cucumbers and tomato myself to have a richer dinner. I shared with them the rest of some popcorn I bought earlier today. They were a very nice family :-) After dinner, when I was ready to go to sleep, they were all around the table eating their dinner. They proposed me to have some with them. Thanks but I was full!

I hope tonight, another storm is coming then! It must! See ya!