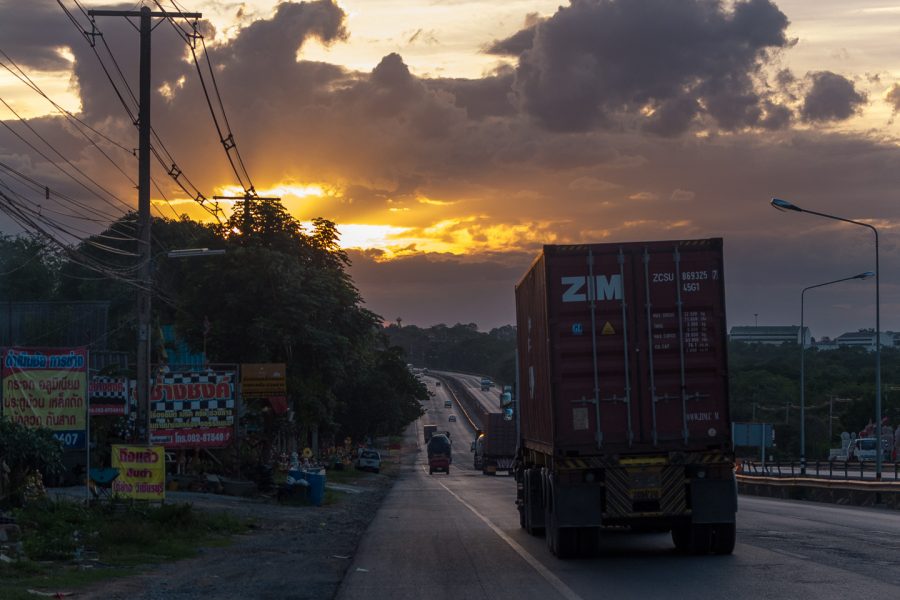 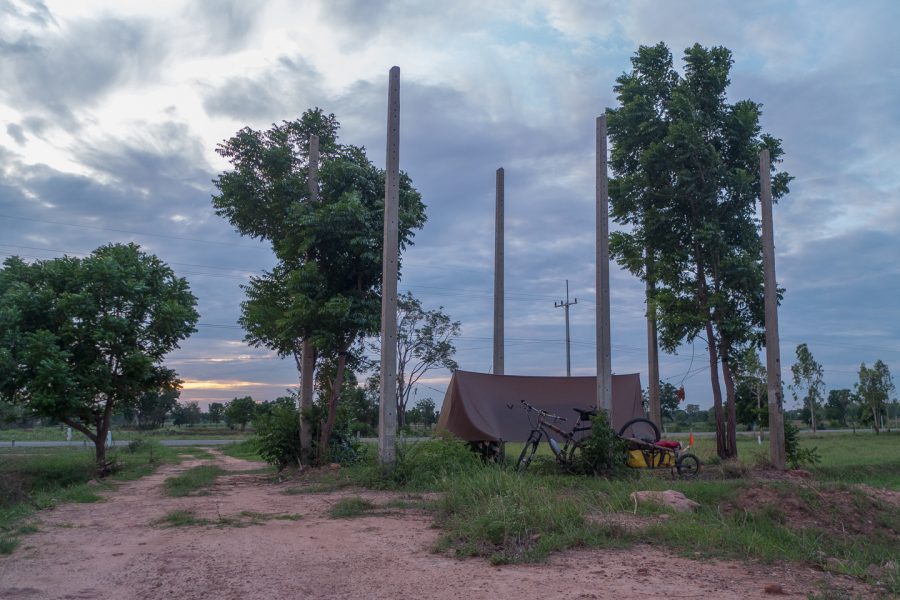 Back to this morning…
That’s the spot where I slept last night :-) I didn’t want to set up the tarp at first. The weather forecast showed that the night was going to be cloudy only. But after an hour, I felt few drops… I also could see far away some lightings. I didn’t want to risk anything and decided to put the roof. Finally, nothing happened… Rah! 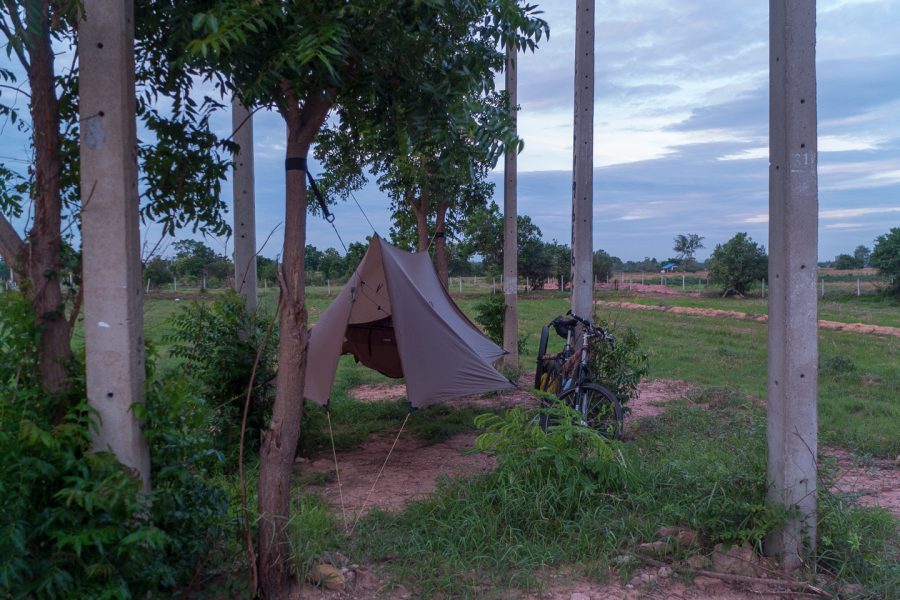 The night was really peaceful. No dogs, no people, few cars. That was good :-) 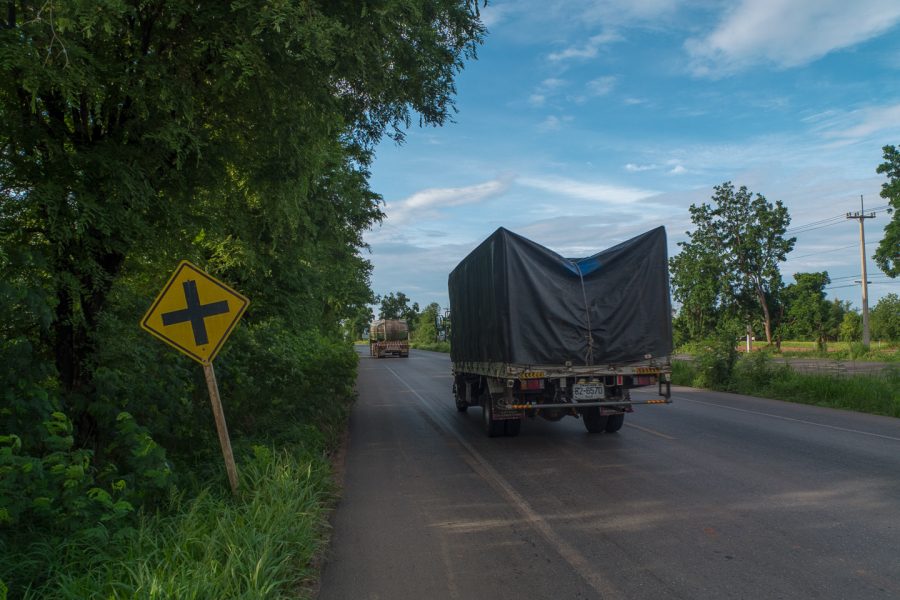 For now, I’ve managed to avoid reaching the highway by choosing a shortcut through small villages. 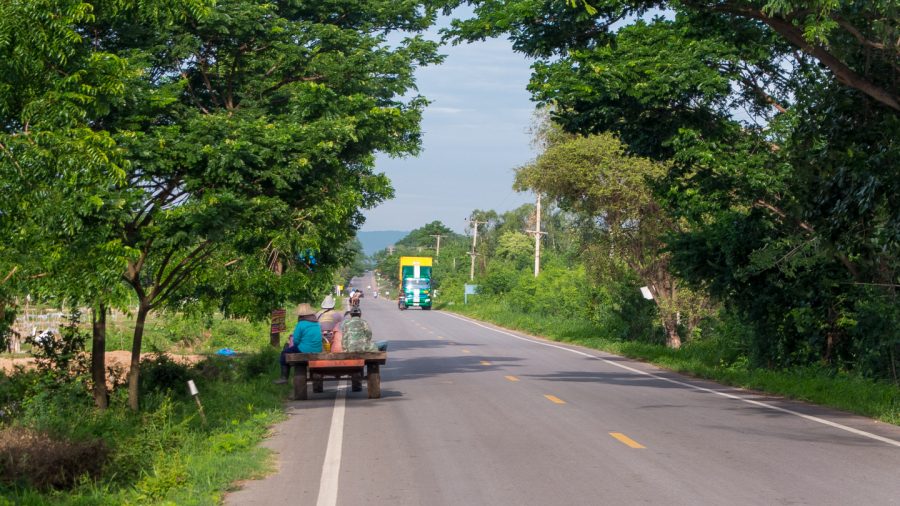 That’s for this morning only because after my daily break I won’t have the choice. As I mentioned before, I will have to get on 80km of highway before being able to leave it again. Let’s enjoy this time then :-) 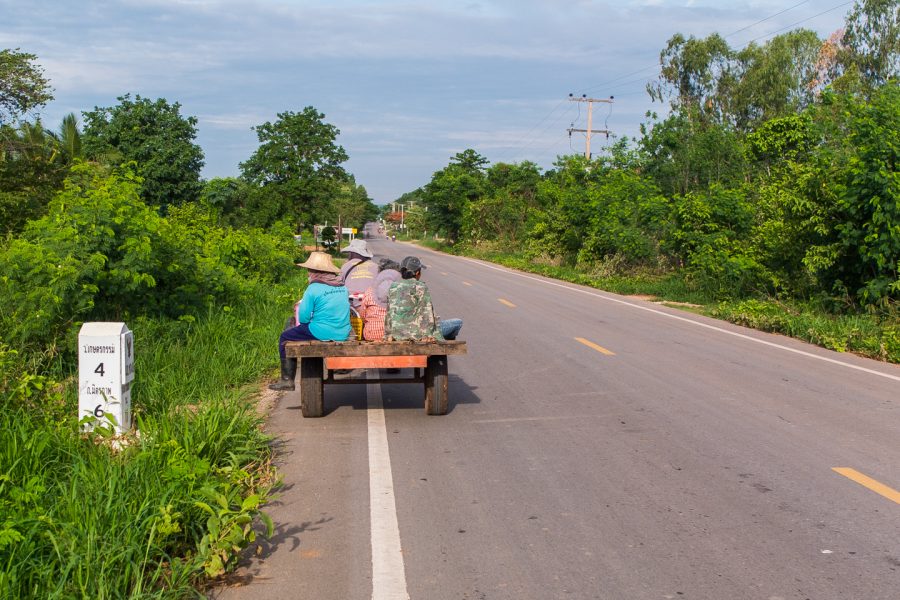 That’s a very cool way to get to work I think. It’s slow, you can enjoy the airflow, I really like this. It might look not safe compared to modern countries, but we should know we are a lot more dangerous be driving fast. Also we are surrounded by so much traffic lights, speed signs, fences and police than we think we are safe. That’s completely wrong to me. All this over safety pushes us to not think anymore and drive even faster. We follow the flow and when something happens, we might make the wrong decision.

In Asia, most of the people drive slow. They also drive against the traffic but it doesn’t mean it’s dangerous because every one knows that, so everyone stays on alert all the time. They think 100% of the time because any car, scooter or bicycle can popup at any time from anywhere. That way, more the people drive, more they become skilful which is the opposite evolution of modern countries drivers. More we drive more we get used to the flow and that’s not good! That’s my personal point of view though.

Today, when we see technology like tracking your eyes to see if you are tired, cars that are able to break themselves, or the auto parking mode. All this assisting technology make us more dumb everyday. Maybe, once the tech’ will become reliable and will be able to handle 100% of the traffic it will become really safe but as long as the safety tricks allows us to drive faster and still make us feel safe, that’s not going to work.

I’m a big fan of the way the movie Wall-e demonstrates that loss of skills. We are heading exactly towards this path… 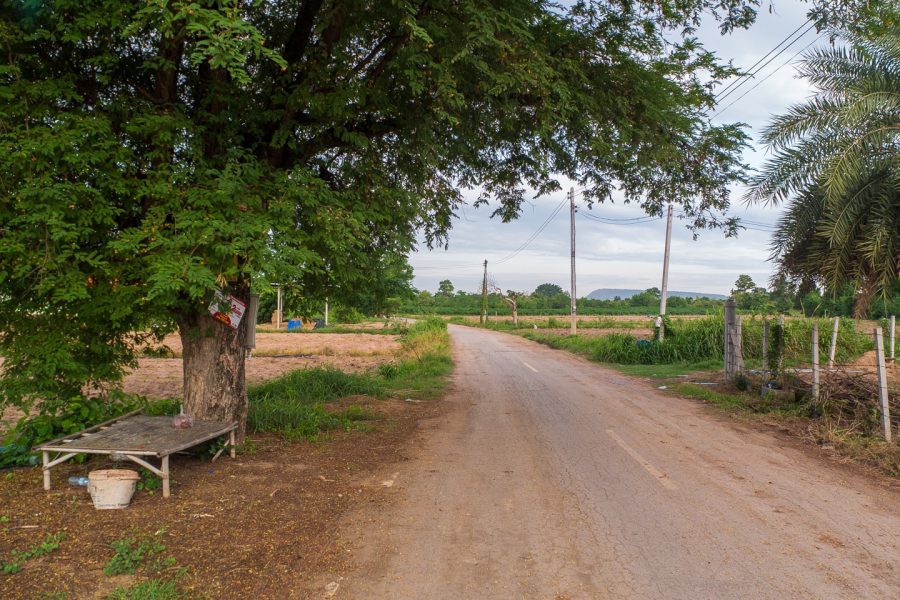 I’ve just had a nice and cheap breakfast at a local restaurant and I’m now on my way to the petrol station. That’s the last piece of quite road for today! 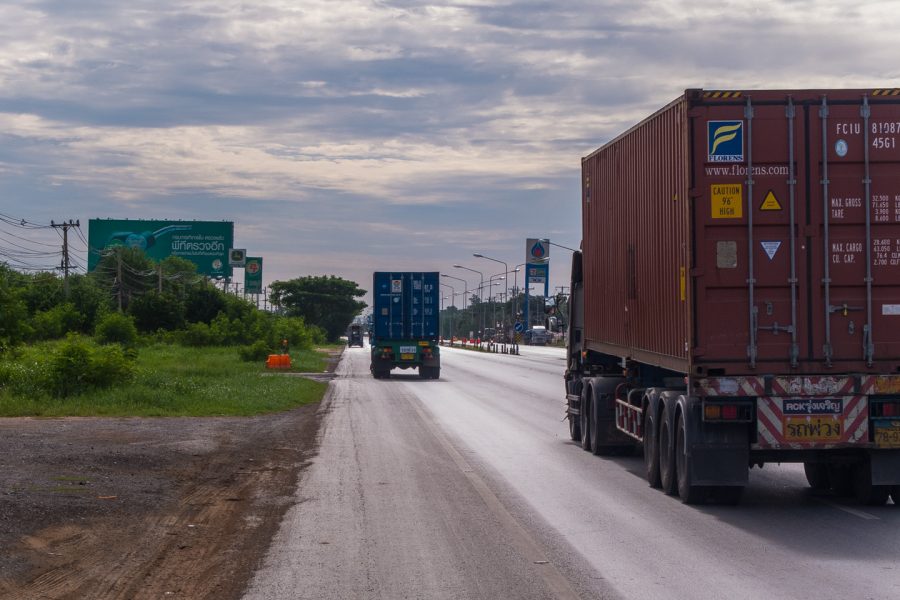 I must go a bit backwards to reach the PTT petrol station (the tall blue sign on the right hand side). I will have to cross the road very soon and ride a bit against the traffic. No worries, I’m in Asia :-) 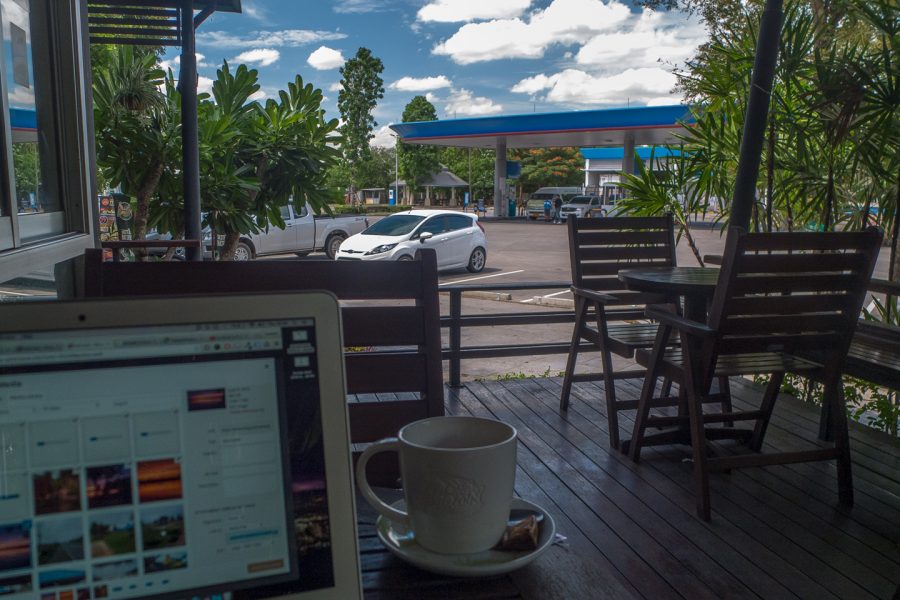 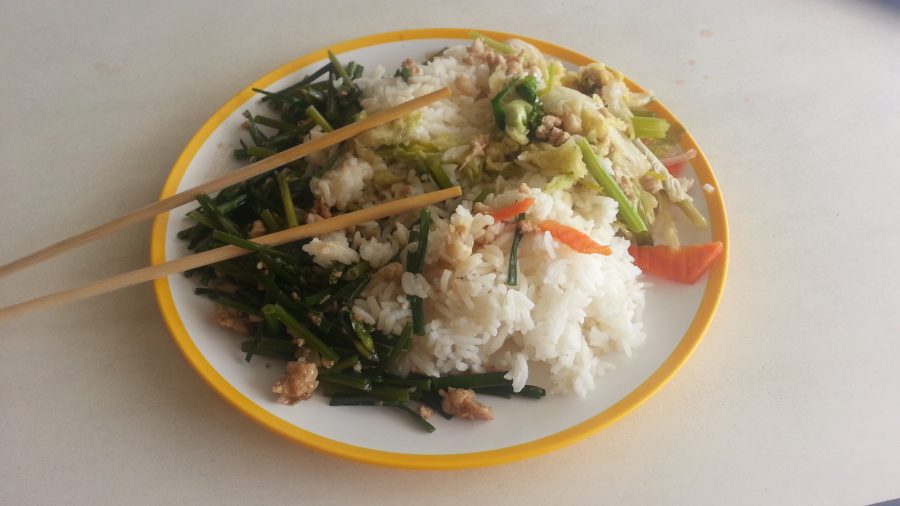 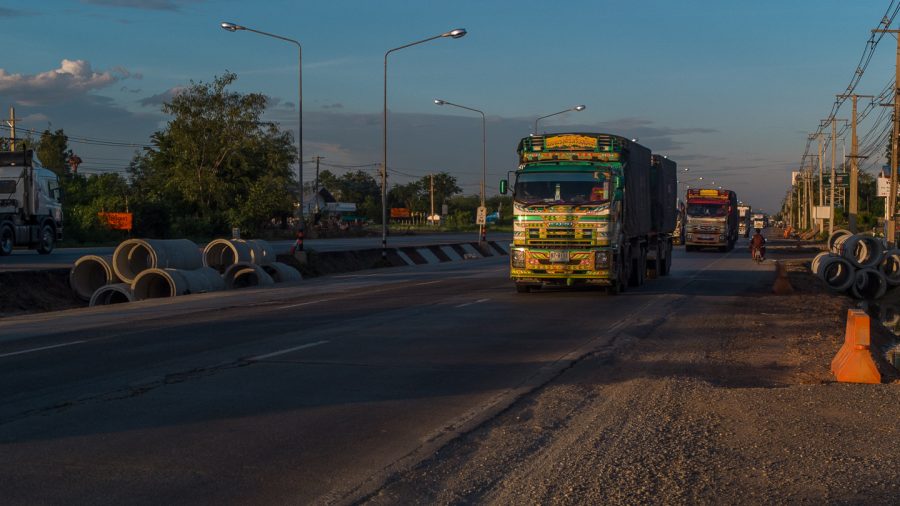 Ow! the traffic is a lot different now. Especially lot’s a truck heading to Bangkok I presume. I don’t mind, I know I will be safe. Look at that scooter on the right hand side of the picture. No helmet, riding against the traffic, even the police do that haha. 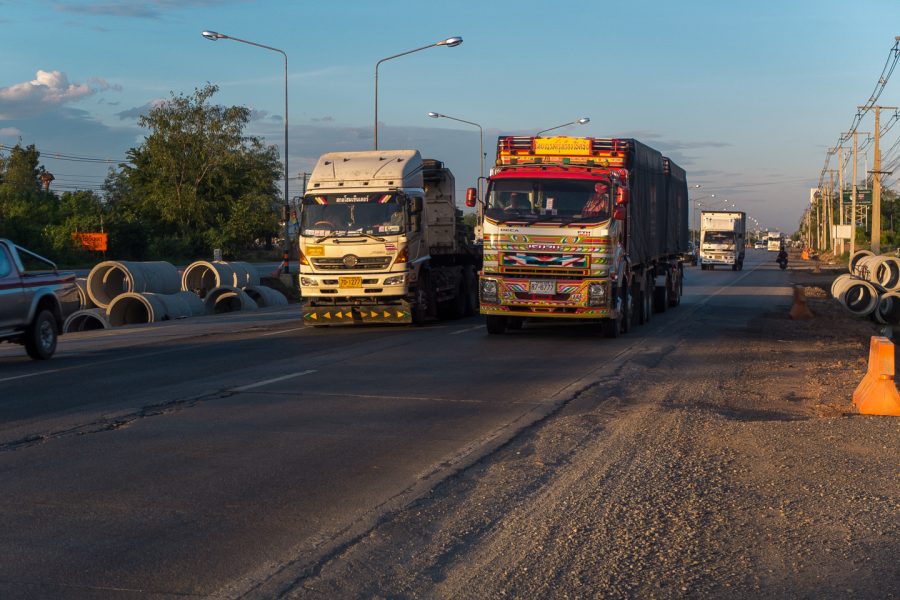 Most of the trucks in Thailand are decorated with fancy “Thai” patterns. Some trucks like to have mirrors, lots of them! Like 15 on each side. I don’t know if it’s useful but it’s very “bling bling”. I will try to get a picture one day. 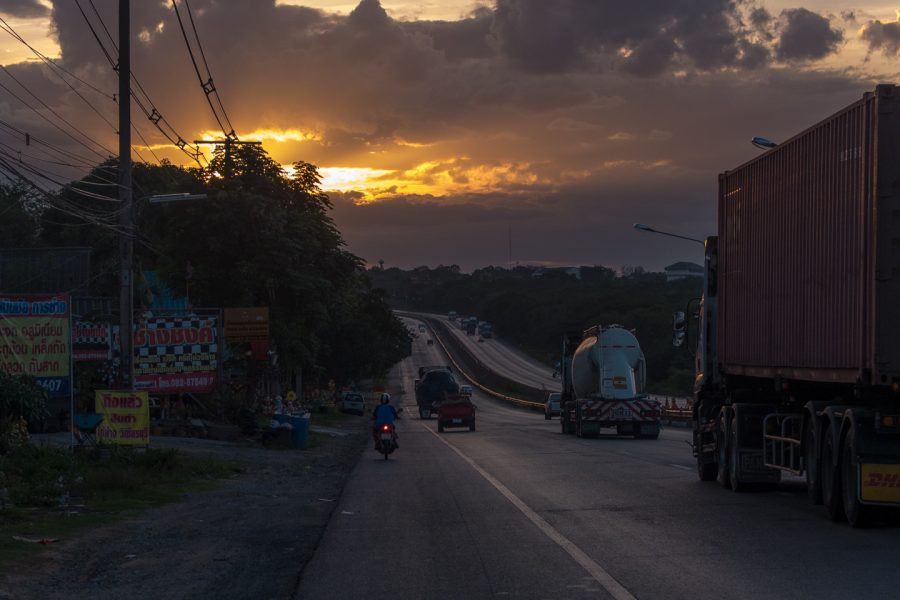 The road is hilly but I can ride very fast. I expect doing 40km tonight because there is detour that will allows me to leave this highway and find a quiet spot where to sleep. 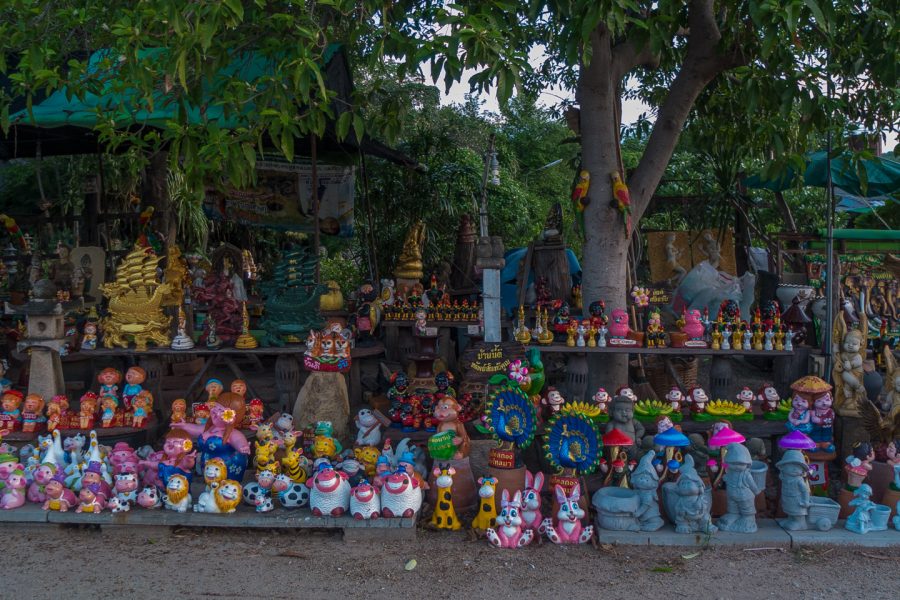 There is lots of these shops along the way. It’s funny that, in Thailand, shops are always grouped by category. If you have a shop selling barbecue chicken and porc sausages, you can be pretty sure the next 20 shops will propose the same stuff. If you want something else, you must go until the next bunch of sellers. 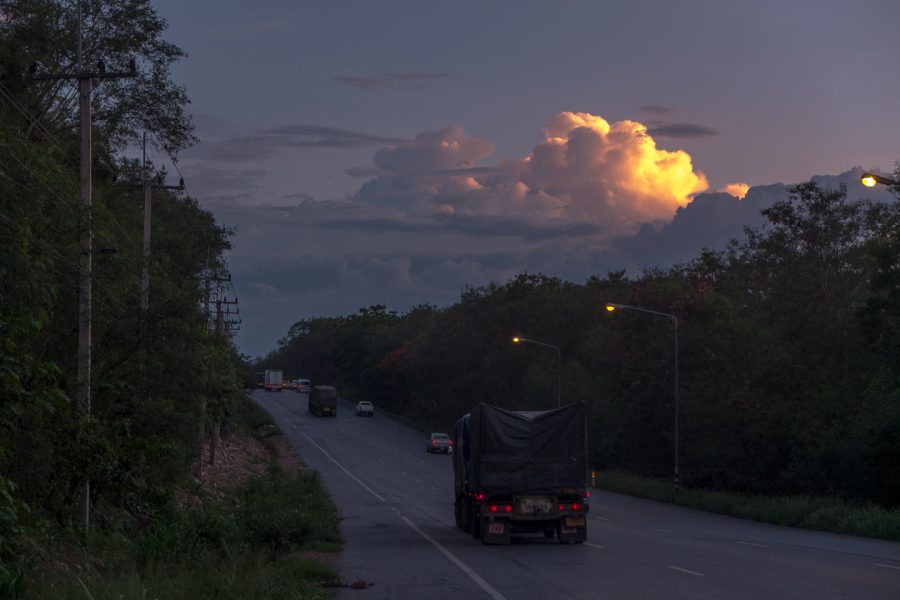 It’s becoming dark but I’ve got my lights on, a large space for myself on the side of the road. Very soon, I will be able to leave this noisy road.

What I knew happened :-) I left the highway, and continued on that detour that will leads to a town. I’ve stopped about 10km before the city. I’ve found a big house on the side of the road that was still in construction. The large living room was fully opened. I pushed the bicycle inside to avoid any attention. This large living room is composed with many poles so setting up the hammock was pretty easy. I used the future kitchen to cook my dinner, that way, nobody from the road would see the flames as I was behind the “bar”. To start the cooker, I always have to preheat it which creates bright flames for about 30 seconds. That’s why I prefer to hide myself.

Unfortunately, not everything worked out as I expected. I had a roof for the night, perfect. I had dinner, perfect. I’m not in a dirty or muddy place, perfect. But I’ve got some friends tonight. The one I love! The one who can hear me from such a long distance which is hard to believe. I’m talking about dogs of course. I think I was pretty quiet but that was not enough apparently.
During I was cooking, I heard some dogs barking maybe 200 metres away. Another one from the neighbour’s house was existed too. I thought I was going to attract attention and someone would come here soon. Nothing like this happened but this bloody dog (the one who was far away) came front of the house and started barking. From outside, the spot I chose was completely in the dark so I could not be seen unless that dog or someone would step in. The most annoying was that the sound was resonating loudly in that empty living room. I had to stop eating for few second and scare that bloody dog!

An hour passed, maybe. I was laying in my bed, looking quickly at the last news when I heard some noise. That bloody dog came back with another one! I guess it was the young one who called dad or mum. Rah! They barked few times at the front, and then walked carefully inside and towards me. They could not see me at all, I was surprised. When the bigger dog was about a meter away from me I just made that sound: “Tss, Tss, Tss”. Hahahah, that was funny :-) The dogs were so scared that they run out as quickly as they could, well they tried to, because the concrete floor didn’t provide enough grip so they struggled a bit. Bloody dog! Once they were far away, I could hear them barking again. They must be pissed off hahah. Cowards!